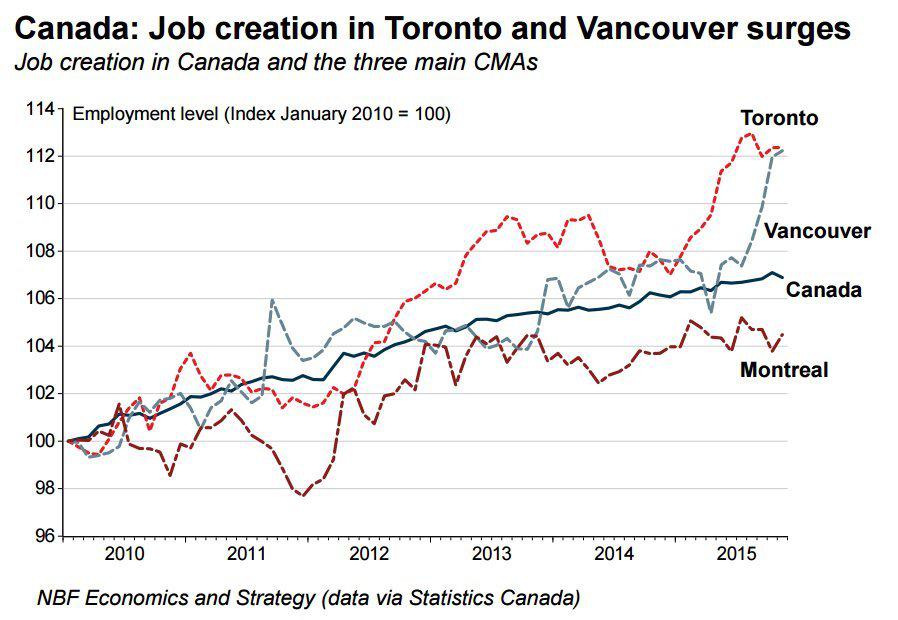 Vancouver home sales soared have 30-40%, compared to a year earlier. In Toronto, prices for single-family homes jumped 13.5% in the past year; an increase of nearly $100,000 on average; where buyers have been frustrated with the frenzied pace of sales – which has hardly given a person or a couple time to carefully think over the most serious financial decision of their lives.
Affordability in the Greater Toronto Area is tougher than it has been in more than two decades.

Insane, right? How can it last? A growing number of experts have been saying that Canada’s great housing correction is a not question of “if”, but when.

But what is being overlooked in the debate about house prices is “Jobs”.

Vancouver & Toronto have created a lot of jobs in the past year. Job growth has attracted migrants from all around Canada, as well as from around the world. National job numbers have looked weak, but for the job growth there has been, it has been mostly in these two major cities where house prices have been out of control. Employment index (sourced from National Bank’s figures) reflects that job growth in both Vancouver & Toronto has been nearly double than the national average, since 2010. However, Montreal’s employment growth has been weaker than the national average; there home prices are $100K below the national average.

Large numbers of permanent immigrants (nearly a 1/4 million) coupled with the misfortune of commodity-producing (oil) regions such as Alberta have redirected population migration flows towards Vancouver & Toronto. So as long as this scenario persists, home prices in these two big metropolitan areas are unlikely to weaken significantly.