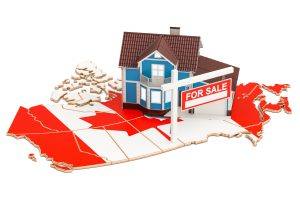 Toronto and Vancouver. Those are pretty much the sweeping consensus answers when asking anyone even remotely in the know to name the two hottest real estate markets in Canada. That they are that way hasn’t really been much of a surprise considering both are a cosmopolitan metropolis that ranks highly on liveability scales and have strong local economies. These days, however, the real estate market in Canada overall has become what experts call ‘flat’ – meaning that home values haven’t really gone up or down to any significant extent.

For realtors working in either of these cities, or elsewhere for that matter, this type of a market means that many homeowners who might have been considering selling their home will now hold off on doing so. At least until the market warms up somewhat and it becomes more advantageous for them to list. This makes it more challenging to generate leads, but here at Real Estate Leads our online real estate lead generation system is a great choice for new realtors who are looking for any edge they can get when it comes to increasing their client base.

Let’s have a look today at how the cooling of housing markets in Canada’s 2 hotspots has occurred, and what goes into it becoming more of a buyer’s market than a seller’s market. First in doing that is to understand the sales to new listings ratio (SNLR).

The sales to new listings ratio is a basic but powerful indicator used by the real estate industry. It’s pretty much exactly as described, being the ratio of homes sold compared to the number of new listings for sale on the MLS. The CREA makes determinations on whether it’s a seller’s or buyer’s market. A seller’s market is defined as when the ratio is above 60, and generally this means an increase in prices. A buyer’s market is below 40, and generally this will promote a decrease in home prices. Between the two means a balanced market – which is ideal, but rarely the case.

Two things to keep in mind here are the speed in change and multiple listings of the same property. A fast-changing ratio can mean a market acts completely oppositely from its true nature at that time. If a buyer’s market is rising quickly, it may seem like a seller’s market, and the opposite can also true. This makes context important.

Real estate agents themselves often can play a role in this disguise. They do this by employing creative and persuasive means to generate a lot of new listings. Often this involves relisting a stale property but that doesn’t really mask the overall trend of weak demand. Using active listings only obfuscates the number of stale listings. There’s something to be said for that in energizing the industry when it needs it, but just remember that no indicator is perfect. Context is everything, and for that reason it’s best to use multiple indicators before coming to a market conclusion.

Highest SNLR Is East Of Toronto

The major regions with the highest ratios are London, Ottawa, and Montreal. London’s SNLR reached 76.8 in September, and that was the highest in the country. Ottawa was next with an SNLR of 68.7, up from last year’s mark of 62.5. Montreal’s ratio was 68, up from last year’s 61. The highest SNLRs are all east of Toronto, and each featured price growth over the past few years.

Here’s a list of all of the top SNLR real estate market locations:

The lowest ratios are now in Edmonton, Calgary, Toronto, and Vancouver. Edmonton had the lowest of any major region, dropping down to 46 in September. Calgary had a better showing with 47.6, still down last year’s 54.9. Toronto came in third with 49, a significant dip from last year’s 56.8. Vancouver was 4th lowest, with an SNLR of 50.7. There’s a lot of different market dynamics in each of these cities, so it’s probably best not to read too much into this.

Only a pair of major markets saw improvements to their SNLR – Montreal and Ottawa. Montreal’s ratio of 68 is an 11.48% increase froim last year. Ottawa’s SNLR of 68.7 is up 9.92% compared to the same month last year.

Here are the Canadian markets with the best SNLR changes, dependent of at least 500 sales in September:

Somewhat surprisingly to some, but not to industry insiders, it’s now a fact that BC is home to the fastest cooling markets in Canada. The SNLR in Vancouver slipped down to 50.7 in September, down 21.76% from last year. The Fraser Valley also fell to 56.4, a 20.23% dip from last year. Victoria fell to 63.6, down 16.43% from last year. Toronto SNLR of 49 is a 13.73% decrease from last year. With all the unsustainable growth seen in these markets over recent years, however, this slowdown shouldn’t come as a surprise.

With only those two major markets showing growth, while all others cooled, indicates this is a national trend. Blaming the mortgage stress test regulations would be incorrect. That’s because most markets don’t have price to income ratios high enough to cap buying. Vancouver and Toronto are two that definitely do, but prices were so far detached from local incomes made the impact minimal. Instead, this probably has more with higher interest rates. Steep prices and the rising cost of debt servicing is making it difficult for greater numbers of buyers to find the incentive to jump into the market.

Sign up for Real Estate Leads here and receive a monthly quota of qualified, online-marketing generated buyer and / or seller leads that are delivered to you exclusively and for your protected region of any area of a city or town in Canada. You’ll quickly see what many other growth-minded realtors have found out for themselves – it’s a great way to get more out of your prospecting efforts and putting you in touch with real clients looking to sell or buy a home.