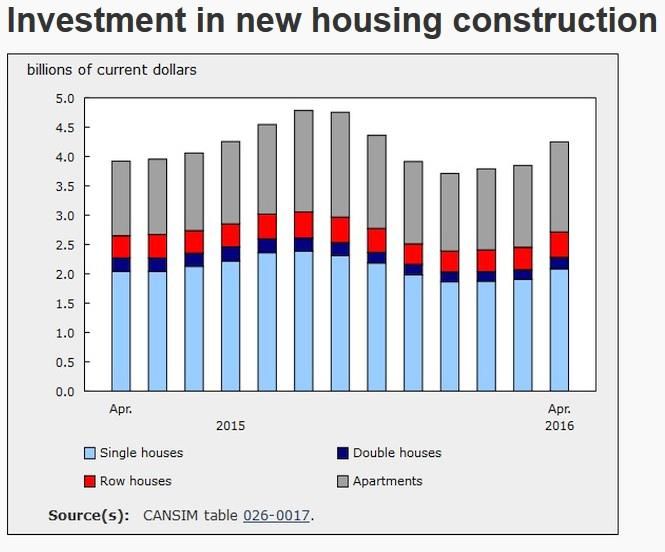 The Canadian housing market is still hot and isn’t showing any signs of cooling yet. Spending on new residential construction totaled $4.2 billion in April, up 8.4% from the same month a year earlier.

Condo construction is up nearly 48% in a year in Vancouver. In Toronto that figure is up by 27%. Detached new home building is up 17% in Vancouver and 36% in Toronto.

However, house prices in Vancouver have seen 30% growth and 15% in Toronto over the past 12 months. The housing stat numbers are even bigger.

But the numbers are very different in the oil producing provinces of Alberta, Saskatchewan, & Newfoundland.

Spending on new housing construction decreased in five provinces, with Alberta registering the largest decline, followed by Saskatchewan and Manitoba.

In Alberta, decreased investment occurred in *all* dwelling types, although the decline was mainly attributable to lower demand and spending on single-family dwellings. 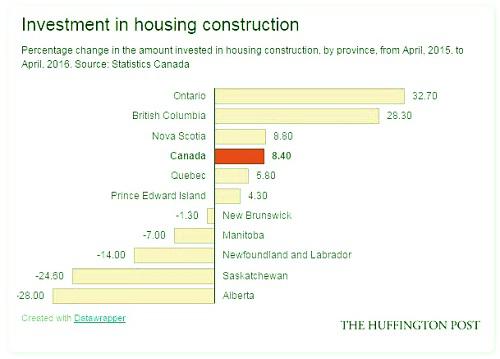 This construction boom could wind up being good or bad news for Canada’s real estate markets. It could create an oversupply or fulfill demand squarely.

These numbers portray that Canadian developers are responding to continuously rising demand in Vancouver & Toronto.

Vancouver & Toronto have also experienced unexpected high job growth in the past several years; which has pushed metropolitan population up; thereby increasing demand on housing.

Large intakes of permanent resident immigrants (approaching a quarter-million per year) summed together with the economic calamity of oil-producing regions have bolstered population migration into Vancouver & Toronto.

For other reasons as well; real estate in those 2 cities is not likely to weaken over the coming years. However, a continued upswing in new condo buildings could take some pressure off prices.

The current boom in condo construction is a sign that Canada’s housing markets are getting stronger. Vancouver and Toronto have both seen a hot market in home sales, but some of which could be explained through foreign investment and house-flipping as spoken about in previous articles.

So if indeed speculation is inflating demand today through overbuilding, then a correction could be more of a higher dive than in the past. Why? When house price growth slows, speculators rapidly start disappearing from the scene, exposing some of the “virtual demand” “demand” that wasn’t so naturally there after all.

So a constant boom in condo construction, resulting in slower price rises, then could end up sending prices lower than otherwise expected when the house-flippers and foreign speculators start to scatter elsewhere.

Did you find this article enlightening? If so, we’d love to hear from you.